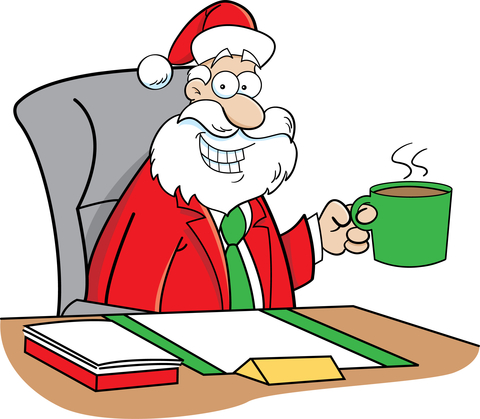 With stiff competition in the job market, nothing is more important than making an investment in a resume which shall garner attention, generate interviews, and ensure job security in a financially rewarding career. This is precisely why Kris Kringle, otherwise known as Santa Claus, knocked on our door and asked for a Certified Professional Resume Writer to compose a powerhouse resume for him in preparation for his off-season.

I explained that in today’s economy, the outdated concept of a functional resume no longer garners the attention of a hiring manager, even if he has done a phenomenal job of branding himself throughout the centuries. In order to leverage a competitive edge in today’s market, he is indeed in need of a resume that will work for him as a powerful marketing document with as many quantifiable achievements as possible.

Just listing Santa Claus’ responsibilities for the past several hundreds of years will have his resume tossed in the trash. In today’s arduous economy, the only way to capture the attention of a hiring manager is to tell the stories of your achievements and the unique contribution you have to bring to an organization with succinct, impactful bullet points in a resume no longer than one or two pages.

As Santa sat down to brainstorm for the project (and broke many of my chairs before he found one sturdy enough for his formidable size), he pondered current statistics revealing that a candidate only has approximately 15 seconds to seize the attention of a hiring manager. We shall admit that even as a Certified Professional Resume Writer, I am somewhat daunted by the enormity of Santa Claus’ portfolio, however, I am thankfully skilled in highlighting key words and phrases to demonstrate the unique value Claus has to offer within such a short time slot of opportunity.

With an innovative and aggressive approach, I employed a methodology that garners attention to how he generates revenue, enhances brand awareness, elevates market share, and grows a new and existing client base (with the assistance of his turbo-charged Naughty or Nice Archives), all with the intention of enticing the hiring manager to take time to delve in-depth into his career history.

To begin, I crafted a powerful branding statement to open Santa Claus’ resume:

What is a branding statement, you may ask? A branding statement crystallizes for Santa his overall career transition goals, his primary specialties, and the unique value he has to bring to a corporation. Branding statements should be succinct sentences (no more than three lines), where the candidate reveals what they have to contribute in a powerful and memorable way.

After concocting Santa Claus’ branding statement, I constructed the sales zone of his resume, which constitutes the top half of the document. Within the sales zone, I gave Santa identity statements such as “Pioneering Leader launching leading-edge techniques to propel capital advancements” and “Transformational Leader in team building for collaborative, cross-functional, and global environments.” Under each identity statement, I basically composed “snapshots” of Santa’s greatest accomplishments ripe with keywords in order to garner the attention of the hiring manager.

Examples of Santa’s greatest accomplishments, revealed in a bullet format, are below:

After completing an exhaustive interview with Claus on how he is able to appear in multiple places at once, I was at last able to conjure a theory told in bullet format for the sales zone of Claus’ resume:

► Improved cost, quality, and speed of delivery 300% by utilizing proprietary algorithm series derived from Heisenberg’s uncertainty principle allowing simultaneous appearance in 6.7B places at once.

Let us also not forget the Grinch:

In the sales zone of his resume, the many roles Santa plays at the Santa Claus Corporation were incorporated, including HR manager:

After developing the top half of Santa’s resume, once again referred to as “the sales zone,” his exhaustive list of educational achievements were mentioned, including an MBA from Harvard, an MS in Physics with a specialization in Industrial Engineering from the North Pole University, and a PsyD in Child Psychology from the University of Alaska.

Needless to say, this was quite a challenge, as his list of achievements stretch back to 1782. Normally, resume writers do not go past the last 15 years of experience in order to prevent age discrimination, however Santa Claus is somewhat of an exception due to his immortality.

Now, we enter the “professional overview” which comprises the second half of Claus’ career history, which has metamorphosed into an efficacious marketing document which is – to the astonishment of his 2,000 elves – only one page long! Considering the voluminous contributions Claus has made as CEO of the Santa Claus Corporation since 1782, it seems simply outrageous to boil down his achievements into a one page document when it could easily be 100 pages!

Alas, I have solaced Santa’s massive team of elves with my astute knowledge of the average hiring manager’s practices in today’s job market, who merely spends a minute or two per resume for every hundred resumes she or he must sort through for one open position.

It is the first 15 seconds of this brief time period which are the most crucial. For in 15 seconds, we must prove to the hiring manager that Claus outshines his competition and would be an invaluable asset to any corporation to which he applies. What is the key to achieving this goal? Brevity.

Upon hearing this, Santa slapped his knee and said, “Levity! Ha ha ho ho. I always knew that humor or frivolity is the key to winning anyone’s admiration and respect! Ho ho hee hee!” I shook my head with dismay, as it seems Santa’s hearing is starting to recede along with his hairline. “BREVITY, Mr. Claus, it is brevity – not levity – which is the key!”

Santa frowned, for this seemed impossible for a 200+ year career history. Overwhelmed by the process (as many of my impatient clients seem to be), he entertained fantasies of eating sugarplums instead of mounting this “marketing document” my quixotic self was determined to deliver.

Ignoring Santa’s lack of belief (so ironic for the man whose speed-of-light delivery methodology requires the faith of so many of his clients across the globe), I divided his hundreds of years of achievements into three categories: 1) Business Development 2) Operations Enhancement and 3) Strategic Management. Such a differentiation is essential in order to provide clarity and order of so many achievements in the same position for so many years. Also, I had to do something to compensate for Claus’ refusal to adhere to the general rule to never stay in one position for more than 10 years.

For Business Development, I outlined how he has clarified his international mission by synergizing his philanthropic agenda with tactical corporate direction. In doing so, he accomplished the following:

► Yielded $10M+ savings in 12 months by improving cost on capital products supplied by secret gnome outside contractor; reduced 45% overhead with supplier in response to cost-down and process analysis results.

► Launched $100M Subordinate Santa Clauses programs constituted by outside shareholders and managers to own and operate Christmas in case of emergency despite immortality.

Upon mention of a “belief in magic,” Santa jolted awake from his sugarplum dreams and was exhilarated to know what I developed for his skills in Operations Enhancement:

For the Strategic Management section:

Upon completion of his resume and cover letter, Claus jumped for joy and employed proprietary algorithm series derived from Heisenberg’s uncertainty principle (his same method of Christmas package delivery) to shoot his resume into the email inboxes of ten million hiring managers simultaneously. Never before have I had a client deliver resumes with such efficiency, to say the least.

Emboldened by his new resume, the effervescent and ever-so-hopeful Claus is now scheduling job interviews beginning the first of the year for various corporations across the world!

Looking to present as effectively as Ol’ Saint Nick? Let us help!